Darley Fulks (1895-1990) in his long life worked as an oil driller, traveling both north and south from his native Wolfe Co., Kentucky, meeting other musicians, and learning tunes everywhere he went. But the greatest portion of his repertoire came from the older generation in his own county. Many of his tunes came from his grandfather and some he could trace to his great-grandfather. Consequently, his music represents both an exceptionally old collection of tunes, many pre-dating the Civil War and unique to him, and an exceptionally diverse range of styles and genres. A search of Kuntz’s Fiddler’s Companion along with requests to knowledgeable fiddle scholar friends yielded only a few analogs and possible sources. In fact, as more and more such collections from regional repertoires come to light, from the samples preserved by fiddlers like Darley Fulks, who were not known outside their own communities and who were overlooked by the collectors and performers who have defined the modern fiddle repertoire, we realize how vast is the corpus of traditional American fiddle music. 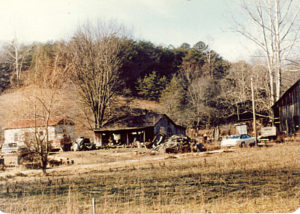 To listen to Darley talk about all the fiddlers he remembered from his travels and from growing up in Wolfe Co. – fiddlers we will never hear who also played many tunes Darley did not remember but probably would have eventually if he had been granted a few more years on this earth – is to be reminded of something Gus and I often talked about as we sought out the old fiddlers in Kentucky: what we don’t know far outweighs what we do. We can only wonder about the tunes that were played, the individuals who played them, and the individual styles that were not discovered and documented. But Darley’s music, so different from much of what we heard and yet pointing in so many different directions, sheds some light into the unknown. Perhaps his importance is in his singularity, his unique sense of timing, his individuality that lies beyond the borders of any presumed style. For all we know this may have been the profile of the backwoods fiddlers of the 19th century.

The keys indicated for the tunes describe the finger patterns, not the pitch. Darley, like most fiddlers of his generation, always tuned a step and a half or two full steps below modern 440 pitch.

This piece is a good introduction to Darley’s style – the bouncy, syncopated saw strokes, string crossings, bluesy slides, and dramatic pauses that hover on the edge of a phrase, building up tension before going on. Meeting Darley for the first time in 1976 and then hearing Doc Roberts soon thereafter forever changed my notions of what old-time fiddling was all about. It seemed that here was the source of a stream of fiddling that had its own language and history and diverged sharply from everything else I was hearing at the time. As I followed those sounds through the years I came to believe that most all of the fiddlers I heard in Kentucky preserved some of that timing and some of that bowing that made them sound different and led some people to talk of a “Kentucky style.”

Darley called this piece a two-step. It was played in neighboring Estill and Clark Counties as a fiddle and banjo tune in the key of D but their low part was not as elaborate as Darley’s setting in C. Another “Everybody’s Favorite” played by George Lee Hawkins further north in Bath Co. was a ragtime tune and not related to either of these. 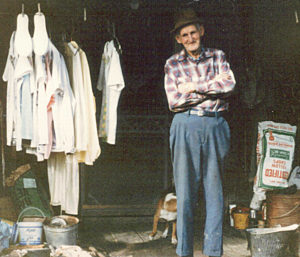 “Awful” of course has an older meaning as Darley’s generation used it. It means literally inspiring awe or astonishment. There were two other tunes widely played in Kentucky that commemorated the fiddling president – “Garfield’s Blackberry Blossom,” and “Garfield’s Funeral March” – but this waltz seems to be unique to Darley and occurs nowhere else that I can find.

It is interesting that a black fiddler named Nero appears in the lyrics to “The Grand Old Jubilee” (track 43), another tune that Darley believes was brought to Wolfe Co. by a soldier returning from the Civil War.

It’s interesting that Darley makes a distinction here between bluegrass tunes (tunes he believed were native to the bluegrass region of the state) and mountain tunes. “Martha Campbell” was considered the “national anthem” by Kentucky fiddlers who boasted that no one but a Kentucky fiddler could play it. Although it was most prevalent in the bluegrass region of central Kentucky, it was also played in the mountains (J. W. Day, Monroe Gevedon, John Salyer, James Crase, Walter McNew, Stanley Fowler, Buddy Thomas, and Bob Prater).   Darley’s account of hearing it for the first time is some evidence for its African-American origins, as if the style and rhythm of the tune were not enough to identify it.

John: What are the words you know?

Darley: “In this great land I stand with my hat in my hand where the grass is as blue as the sky. It is no surprise that I have tears in my eyes as I’m here to bid you goodbye.“ And that’s all I know.

John: What was it called, what was the name of it?

Darley: “Farewell Kentucky“ is what Nora Horton called it. From Stephen Foster.

Kerry Blech found a song, “Farewell Kentucky Home” by George B. Gookins, published in 1895, and pointed out that Foster’s “My Old Kentucky Home” spawned a lot of imitations, so who knows what the true origin of Darley’s tune might have been. It is at least possible that his third-hand account of the story is true and it does represent a lost Stephan Foster tune.

“Cumberland Gap” was a standard tune in east Kentucky and always played in G. The general preference of Kentucky fiddlers for the key of G may be due to the fact that the layout of the scale on the fingerboard is ideally suited for the bowing and phrasing tendencies that they preferred.

The sound effects imitating the horn occupy another of those pauses that Darley incorporated into most of his tunes. The breadth and variety of so-called crooked tunes – the many different ways they can depart from standard 32-bar phrasing – is as varied as the individual fiddlers themselves. Darley often put these pauses in the middle of a phrase, not at the end, withholding the resolution of the phrase, which had the effect of creating tension and anticipation. Nikos Pappas, who has studied these permutations and attempted to classify them, probably has a name for Darley’s preferred approach. Whatever else we might say about it, it is one of the defining traits of his style.

Kerry Blech cites Wilbur Sweatman’s 1911 composition “Down Home Rag” as the likely source of the tune the barber played in Michigan. He says that Ohio fiddler Lonnie Seymour also played it. Darley’s piece departs somewhat from the 1911 composition in typically Darley fashion so it might be regarded as a distinct variant.

This tune may have come from western Kentucky but it has all the hallmarks of Darley’s style, suggesting that he, like most fiddlers of his generation, came up with his settings by putting them through the filter of his own imagination. This intense individuality which can totally transform the source a fiddler learned from may run counter to the local style and should remind us of the difficulty in attempting to define and generalize about regional styles (although I do it all the time, a habit I acquired from the giddy times I spent on the road with Gus and Mark, full of excitement and wonder at the amazing sounds we were hearing and trying to put it all into some kind of context.)

John:   Did you play at the picture show down at Campton?

Darley: Yeah, yeah. If I wasn’t out on a well somewhere and I was in town, why they’d always let me know and they’d always get after me to play the fiddle down there and bring the band, I’d bring these boys that played with me down there and play for the picture show. Yeah, old Newt Williams, he’s dead now, Newt Williams.   Every time he’d holler out, “Play my piece, Darley,” and I knew who it was a-hollering and I’d always play him that piece.

This is another piece that seems to have roots in the ragtime era, or possibly in something prior to that out of which ragtime grew. 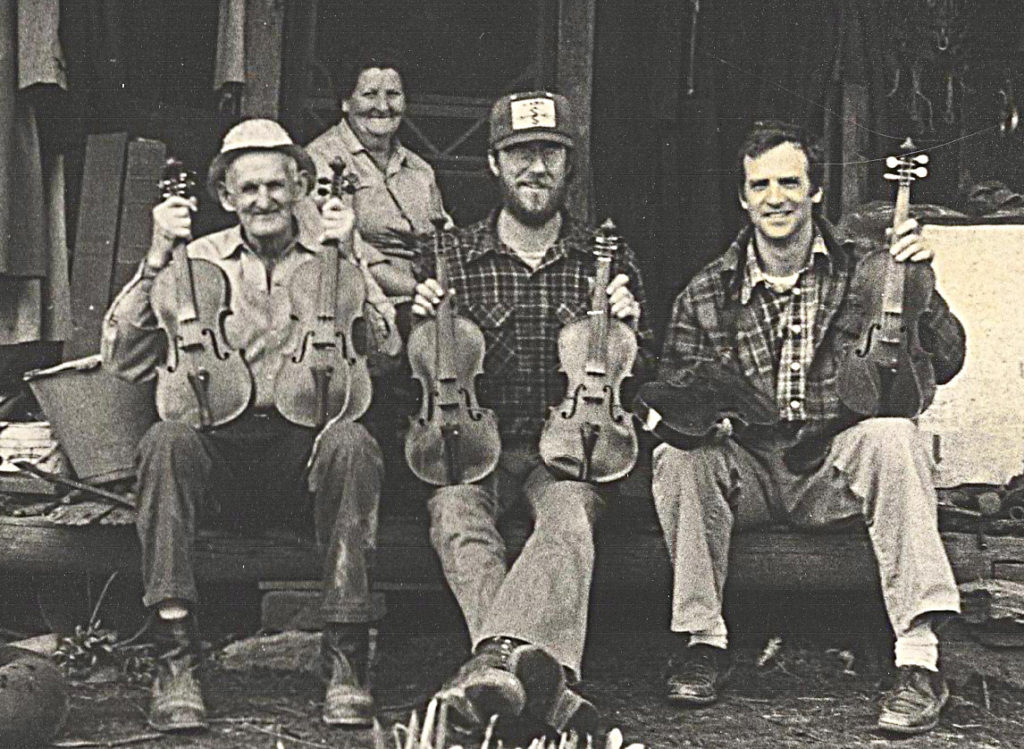 There was an old man at the filling station and I played that piece and he just went crazy over it. And I told him who made it, Fiddling Doc Roberts made it, but he didn’t believe me. He thought it was from some other country or it come in here from somewhere.

Actually Doc Roberts himself credited African-American fiddler Owen Walker (born in 1854) as his source for the piece. It must have been widespread before Roberts’ time because it was widely played by older fiddlers throughout the bluegrass, including many who had never heard of Doc Roberts.

This was the only true jig that Darley played. It is significant that he learned it in his travels up north. Jigs were practically non-existent in Kentucky south of the Ohio River.

Darley’s love of playing in F, even breakdowns that might seem to fit as well in G, reveal interesting bowing and finger patterns that will grow on you with time. He liked the way the scale laid out and in those tunes he used the full scale. All the old fiddlers played in F, he would say. To get that in another key, why you’d have to go all the way to the bridge.

We observe that this tune is basically the same as John Salyer’s “Jack Wilson” with the difference being that Salyer’s tune is in the key of D. 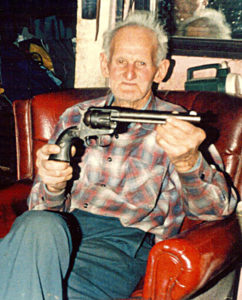 This is Darley’s version of the tune otherwise known in Kentucky as “Waynesboro.” The title suggests that it was played in the early half of the 19th century long before Doc Roberts recorded it as would be expected of a tune with a direct Irish ancestor (“Over the Moors to Maggie”). This is the only tune of Darley’s that is duplicated from the Rounder anthology (Traditional Fiddle Music of Kentucky, Volume 2: Along the Kentucky River, Rounder CD 0377), well worth getting if you can find a copy. This track is a different take, however, from the one included in the anthology.

This is the most intriguing, intense, and unusual setting of this old standard I’ve ever heard. One of the marks of fiddling excellence has to be how a gifted player can transform and give new life to a familiar tune that has lost its edge by being too well known.

Old Nero was playing the fiddle over by the door.
It looked like he’d tear all the hair right out of the bow
Old Wesley was throwing hisself away on the old banjo.
Some were dancing, some were singing, the old folks were on their knees.
It just seemed like everything came down from heaven
that night at the “Grand Old Jubilee.”

Now some of them called it “Go Free, Old Slaves” and some folks called it “The Colored Folks Jamboree.” That’s when they got word, John, that slavery was over and they was having a celebration there. I always will believe that that piece and another piece I know was connected to some great colored fiddler down there because there’s a piece called “Nero the Slave” and in that other piece Nero was over by the door playing the fiddle, you see. And my grandfather told me that at the close of the war some Union or Confederate soldier must have been a fiddler that got through the war and come back into this country and brought that piece with him and heard that colored man play that fiddle.